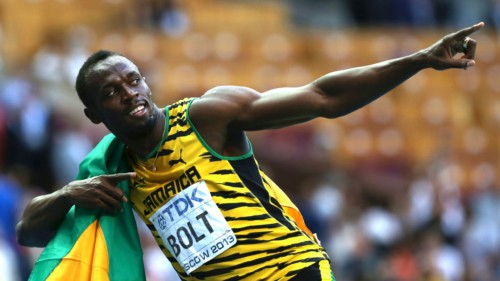 One of my favorite living people with scoliosis is Usain Bolt. Talk about not letting scoliosis hold you back! I have to admit I’m a total Olympics junky and have rooted for Usain throughout the last 15 years.

Over 10 years ago, during one of the summer Olympics, I was teaching a regular weekly lesson to one of my scoli kid clients when her dad told me that Usain Bolt had scoliosis. I was shocked and started researching him incessantly—his spine, his trainers, his view on his scoli, and the exercises he did to care for his back.

Fast forward to just a few months ago when I was teaching at a conference about scoliosis and exercise. One of the men attending told me I had to read a NY Times article about Usain and his back—and his legs. It turns out he has a leg length discrepancy, and scientists believe that’s what gives him the extra power and speed.

Usually when people have a leg length discrepancy, trainers work to level the hips out with shoe lifts and similar items. The Times article argues that Usain’s sprinting advantage actually stems from the unevenness in his legs. The difference in length allows him to have more power when he pushes off from the shorter leg. That threw my head for a spin.

Here is an excerpt from the article that made me do another double take:

“It could be that Bolt has naturally settled into his stride to accommodate the effects of scoliosis. The condition curved his spine to the right and made his right leg half an inch shorter than his left, according to his autobiography.”

I was beginning to wonder, did the scoliosis cause the leg length discrepancy? There can be several causes of a hip sitting higher, and one is tight tissue. The tissue on the concave side of a lumbar scoli curve can be so tight it can actually pull the hip bone up, creating a the effect that one leg is longer.  This doesn’t make the actual leg bones longer though. The leg bones are still the same length, but one hip does sit a little higher. But, after tissue manipulation the hips can level out to the same height.

I don’t believe tight tissue is what caused Usain’s hip to sit higher. He had a full-time massage therapist that worked on him daily when he was in the prime of his running career. His massage therapist and other trainers would have caught any tight hip tissue and released it, allowing his hip to drop back down.

Instead, I think Usain has a bony leg length discrepancy, and that is what caused his scoliosis—meaning he has functional scoliosis. His spine bent into a scoliotic curve as a function of one leg being longer. I think Usain even has it wrong in his autobiography. Usain’s scoliosis didn’t cause his differing leg lengths; the difference in his legs caused the scoliosis. This is a good illustration of how much misinformation there is surrounding scoliosis—even Usain Bolt, who we can guess sees some of the top practitioners in the world, was misinformed about the root cause of his scoliosis

His longer thigh bone caused the same side hip to sit higher, which caused his spine to curve to the twice (his scoliosis) to compensate. The scoliosis didn’t start from the spine and go down to his legs. It started in his legs (one being half an inch longer in length than the other) and went up to his spine.

Whether you have scoliosis or work with scoli clients, it’s vital that you learn to assess if a case of scoliosis is caused by a leg length discrepancy. Equally important is to know how that assessment information plays into the scoliosis care plan.

All too often I’ve seen that those with scoliosis and their practitioners just focus on the back and ignore the rest of the body. But what if another part of the body besides the back is actually what caused the scoliosis in the first place? It’s an interesting situation and one that played out in the story below.

If you think you or a client may have a leg length discrepancy, I’d also suggest you read Analyzing Scoliosis, as there’s a whole section in the book on analyzing and dealing with leg length discrepancies. You can also check out the in-person Scoliosis Intensive workshop offered regularly at Spiral Spine Pilates Studio.

If you do find out you have a bony leg length discrepancy, there’s nothing to fear. Who knew that you share the same super hero power as Usain!